Labeling Food as “Good” and “Bad”

When people are diagnosed with diabetes, there is heightened focus on the amount and type of foods they eat. They are typically recommended to monitor and cut back on their carbohydrates, which can lead them to categorize foods as “good” or “bad.” In doing so, individuals with diabetes often obsess over food labels and become hyperaware of their caloric intake, as well as develop feelings of guilt and shame consuming a “bad” food item.

There are several low-carb diets prescribed for people who suffer from diabetes, including Keto, Paleo and Atkins. While these diets may intend to help those with diabetes, they also promote restriction and rigidity with food, which puts people at an increased risk for developing an eating disorder or relapsing from a pre-existing one.

Doctors often recommend that people with diabetes increase their activity levels and reduce their weight to manage their diabetes. This is especially true for people with Type II diabetes, as it is correlated with being in a larger body (Grey, Picone, Sloan, & Yashkin, 2015). This stigmatization is fatphobic and does not account for the structural inequalities and systems of oppression that impact people’s relationships with food and exercise (Union of Concerned Scientists, 2016).

It’s also important to mention that:

Understanding the Dangers of Diabulimia

People with Type I diabetes can also develop diabulimia. Though not an official diagnosis, this terminology is used to describe cases in which people skip the insulin they need to treat their diabetes to lose weight.

When someone has Type I diabetes, it means their body can’t produce insulin, so they can’t process sugars. Their blood sugars rise and are released in their urine, causing weight loss. When people who suffer from Type I diabetes begin insulin treatment, their weight tends to increase. This can result in body image distress, which can lead to skipping insulin to manage their weight.

Once diabetes develops, it’s a long-term condition. There is no cure that will make it go away for good. This can feel devastating and stressful for many and can feel like they’ve lost control over their body. Managing food and exercise is often an attempt to re-establish control. Furthermore, for people who struggle with perfectionism, counting carbohydrates and aiming for perfect blood sugar levels can trigger on obsessive thoughts about food and exercise as people strive to be “the perfect diabetic.”

Recovery from an eating disorder is possible and help is available. You do not have to navigate this process alone—it can be helpful to work with a team of providers (i.e., an endocrinologist, dietitian, therapist, and psychiatrist) to explore how diabetes and the eating disorder intersect. Together, your team can help you develop ways to effectively manage both. 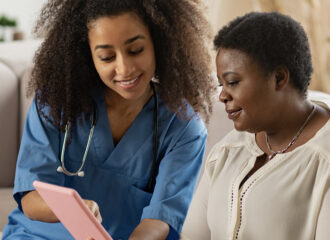 Referring a patient for eating disorder treatment is a process that requires careful consideration. Here’s a brief guide to what clinicians need to know.