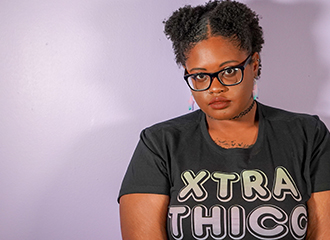 Growing up, I have always lived in a larger body and was used to being bullied relentlessly for my size. I was about 12 years old when I first decided to do something about it and began dieting, which eventually lead to me restricting and purging.

Even after my parents found out, because of my size, it was not treated as the makings of an eating disorder, but as “just another thing wrong with Aja.” I continued to use behaviors on and off for years, never believing I had a problem, but that this is just what I had to do to punish myself for looking the way I did.

Fast forward to 2019. I’m 27 years old and the heaviest I’ve ever been and devastated. My disordered eating habits came back in full swing and turned into a raging eating disorder with a mind of its own. I restricted heavily and purged what little I did eat. I was terrified of food and obsessed with weighing myself and the idea of getting smaller. March 2019 was when I finally decided to ask for help and walked through the doors of Renfrew in Philadelphia, PA. There, I was met with dietitians and therapists who validated my illness and told me that regardless of my shape/size, I WAS “sick enough,” had an eating disorder, and deserved treatment. It was hard to accept, but slowly a new way of thinking began to set in.

While it took two more stays at Renfrew that year, and an additional stay at another residential facility, for me to get to where I am today, the things I have learned at Renfrew have carried me through my journey. Renfrew taught me to not bury my emotions, and instead use things like the ARC to figure out what my emotions were trying to tell me so I could better cope with them. I also learned to practice self-compassion and that it is okay to be struggling.

Times are hard for a lot of people right now, and the temptation to numb out and use symptoms is high, but to all my readers, please believe that you DO NOT deserve the pain your eating disorder will ultimately bring. Lean into your feelings, have compassion for yourself because your pain is valid, and talk about these feelings with a therapist or someone you trust. The unknown is scary, but we do not have face it alone.

Aja is 29 years old and lives in Florence, NJ. She is an alumna of The Renfrew Center of Philadelphia, PA. She works for a utility company, but her passion is music. She released a debut EP, “New Beginnings,” under the stage name SongBird in June 2020, and it is available on all streaming platforms. Her hope is, through her music, she can empower others to blossom into whomever and whatever they want to be, despite the challenges they may face. She is very open about her mental health issues, eating disorder, and recovery from substance abuse. These are topics featured in her songs, as a way to relate to her listeners and show them they aren’t alone. She is currently taking a dual certification class in audio engineering and music production in hopes of being able to produce her own songs.